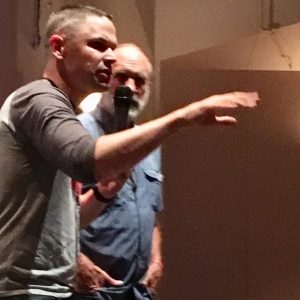 I have learned much over the past two decades concerning prayer, fasting, and intercession from the life and ministry of Lou Engle. I first met Lou in front of his house on February 23, 1999 in Pasadena, California. As I stood there, Lou prayed for me to walk in the fullness of my prophetic calling as an Elisha.

As a young 24 year old, that moment forever changed my life.

Within days I started receiving prophetic dreams from the Lord; over twenty years later, I have been blessed beyond my wildest dreams to continue to receive extraordinary dreams from the Dream Maker himself. Like Samuel of old, I’ve learned to posture my heart in humility before him with these words on my lips, “Speak Lord, for your servant is listening” (1 Samuel 3:10).

For that entire week in ’99 I prayed with Lou every morning in the Mott Auditorium at 5am for revival to sweep our nation. It ruined me for anything less than an all consuming passion to see Christ exalted as revival brings about a transformative kingdom work in the lives of those affected.

Beyond ’99 Lou’s ministry continued to impact my life, though mostly from a distance through his books and messages. In the early days, I was fathered by Lou through his messages on cassette tapes, CDs, articles, and books such as Digging the Wells of Revival, Fast Forward, The Call of the Elijah Revolution (which he co-wrote with James Goll), and Nazarite DNA. For years I was greatly enriched by his consuming passion for Jesus, tenacious faith to see the ending of abortion, and to experience a Third Great Awakening that forever changes the landscape of our nation.

Then in 2015 I reconnected with Lou due to a prophetic dream I had with Lou and his spiritual son, Darrian Summerville. Darrian relayed the dream to Lou, and we did as Lou often says in his raspy voice, “Let’s do the dream!”

Since that time I’ve been further enriched by his life as I’ve gotten to know Lou from a closer proximity (than before). In this season I’ve sought to serve him by lifting up his arms in prayer as I relay to him what the Lord instructs me, prophetically speaking. I’ve learned a key lesson in all of this. Whether from a distance or within close range, we must learn to allow the mantle of spiritual fathers to father us in the Lord, even if there isn’t an intentional, established father-son dynamic. Regardless, I owe much to this man’s ministry in terms of who I am today as an intercessor and as a prophetic voice.

I am a man “laid low in the dust” (Psalm 119:25)—broken, yet drenched by the dew of Heaven. A lover of all things pertaining to Christ Jesus (and Reese’s Peanut Butter Cups!). Victorious in Christ. Husband to a Polish beauty. By day, a wannabe superhero to two precious daughters. By night, a soaring prophetic dreamer. Servant. Writer. Revivalist. Entrepreneur, consultant, and publisher in former season of life. A voice with a revelatory bent. Weak beyond weak, yet strong in Him! An overcomer. One conquered by love. Read full bio

Get posts by email